The Little Girl Who Refused to Hate 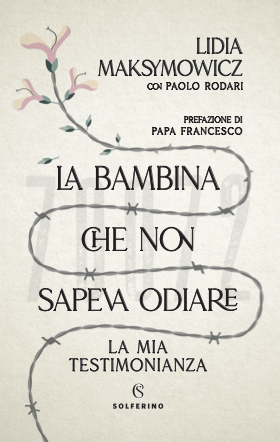 At three years of age, Lidia Maksymowicz and her Catholic family were arrested and deported to Auschwitz from Belorussia, where they were hiding with Partisans. A survivor of Mengele’s experiments, she was adopted and raised by a Polish family who owned the land upon which Birkenau was built. At seven years of age, she had lost the ability to cry. In 1962, seventeen years after the liberation, she was reunited with both her mother and father who were living in Moscow. Thereafter, Lidia and her two mothers met up yearly in Auschwitz for the anniversary of its liberation.

Lidia Maksymowicz (1940) is a Holocaust survivor and testimonial for the Auschwitz Museum. Paolo Rodari (1973) is the author of several best-selling memoirs and the Vatican correspondent for the daily newspaper La Repubblica.

I remember her hugging me during those visits. There was no food, but every now and then she somehow managed to smuggle me onions. She fed me with her bony fingers and then I ate alone in the dark. Sometimes I tasted the dirt, felt it between my teeth. There was no water to clean the onion, so I ate them as they came, without wasting even the tiniest bit. And I share with no one. As unattractive as it is, I admit that the instinct for survival guides me like no other. It is the same with the other children: a ferocious and brutal primal instinct. That is what we became and what we are; we share that trait in Birkenau.
I have little memory of our conversations and yet there must have been many. The only words that stand out in my memory are when I begged my mother to leave me her hands instead of onions so that they could hold me during the long, dark nights.
The nights in camp were terrible. I suffered from fear and the feeling of abandonment. I felt as though I would be lost there forever.
My mother’s hands are skinny and dirty, because she pulls herself along by groping at the ground. Sometimes she crawls in mud, her nails black with the wet earth beneath her. Meter after meter.
The children’s barracks where I sleep are reserved for Doctor Josef Mengele’s guinea pigs, us. Wooden shelves serve as beds and every compartment has three, one over the other along the entire rectangle perimeter of the barracks. We practically sleep on each other like ants. I learned early that it is better to stay on the top level, near the ceiling. That way you avoid the dripping excrement. I am not always able to find the sleeping place I want so sometimes I am forced to stay in the middle. Other times, on the lowest level. When that happens, I know what to expect but I accept it in silence. Complaining and crying is seen as a sign of weakness and in Birkenau you must stay strong. Resolute, but not arrogant, and alive.
My mother looks for me. She whispers my name.
Luda?
If no one answers, she moves on and asks again: Luda?
She usually has to look for me just to hold my hand, but at least she knows I am still there, and Doctor Mengele didn’t take me away or kill me while she was working in the fields. At least I was back in the barracks alive, hurt, but alive.

She slips on the brick pavement. The children’s barracks is the only one to have a floor. The walls are filled with drawings.
One day she came and couldn’t find me. I was nowhere to be seen, not on any of the wooden planks. They told her that Mengele had taken me the day before. She returned the next day, desperate, and still I was not there. The third day, she found me, unconscious, lying on a dirty slate, cold as glass. Mengele must have gone overboard that day.
My mother hugged me and kissed me, trying to help me regain consciousness. She can’t do much else. I wake up and survive, a miracle in days of death and desolation.
Thirteen months in Birkenau means two winters and the suffocating humidity of the continental European summer. In the Spring, even though flowers grow, fed by the ashes of the crematory, they don’t really bring hope. And the Autumn season feels like an end since it preannounces the cold of winter. There is no future in the seasons there.
I never asked my mother where the onions came from although later in life, I developed my own theory. My mother was a healthy young woman and every day she was taken out of the camp, beyond the fence and the crematory, to work along the river. Men and women were forced to repair the dams along the river, clear out the blockage, and cut the reeds that grow around it. The village of Harmeze, not far from there, was occupied by the Nazis who built a farm to raise poultry and produce food for the SS. Some prisoners were able to steal food from there, but I believe that my mother’s onions came from the generosity of Polish people who lived near the camp. She never really offered an explanation. Take it, she would say, and I answered without asking further.
As the war went on, my mother’s visits became increasingly rare. She wasn’t really able to be with me, to keep me company, because she was afraid of being found. But when she did come, and especially in the end, she forced me to repeat my name, my age and country. She made sure I would remember who I was and where I came from in case she didn’t survive the war. She wanted me to remember her, the woman who gave birth to me, who fed me and first held me so that I could one day find her again. She made me repeat it: my name is Ljudmila, Luda, I am five years old and I come from Belorussia, near Vitebsk on the border with Poland.  She promised that sooner or later she would take me with her, that this would all end soon and we would return home, to our village, our forest and our land where everything would be the same. But the days went on and nothing changed. We were lined up, divided into two lines, the longest line went to their deaths and a few of us survived. Those who rebelled were executed.
We considered the Germans animals. Sometimes we would have to stand naked in front of them. They didn’t know that we felt no shame because you can’t feel shame in front of animals. Nude or dressed, it was the same for us children.
When my mother returns to her barracks, I close up like a porcupine and return to my world made of silence, my own, which is the only answer I could offer my tormentors. With no teachers, friends, or allies to teach me, I depended on my instinct. When a mouse crawled on top of me in search of food, I remained silent; when the child next to me coughed in the night and died; when the lice and ticks attacked me; when the SS came to take me to Mengele. In that silence, I tried to disappear so that I wouldn’t die. It is a silent front for my mother who forces herself to seem calm. I do not want to seem weak in her eyes. I don’t want to make her suffer and I don’t want myself to suffer either.